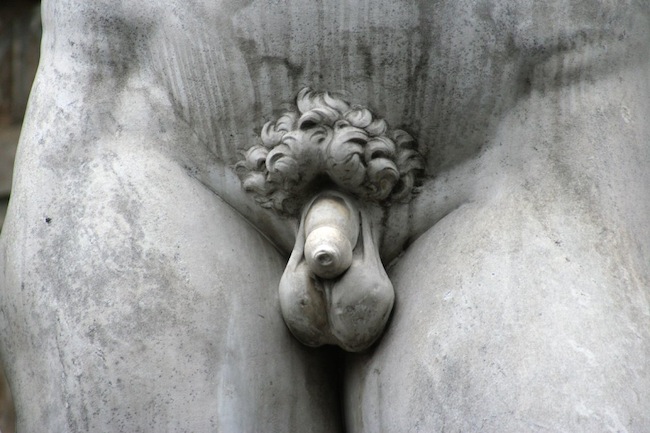 This is a Reprint (with Permission) of Let’s Talk About Penises, Shall We? by Carlo Alcos from ConfrontingLove.com.

February’s theme at Confronting Love is “Body Image.” Our culture has done enough damage in making us feel ashamed for being born the way we were. It’s time to fight back.

[Preface: I will not be apologetic for what I am about to write, regardless of how uncomfortable it may make you feel, particularly those who know me personally. This is not about you. This is about me and about anyone who feels the same way as me. I am doing this for two reasons. They are:

1. I am tired of not being comfortable in my own skin. Our culture has taught me that I need to be like this and be like that in order to be liked, loved, desired, respected.

2. I want everyone, men and women alike, to not feel ashamed about any part of their body. We all deserve that. I am willing to take a little heat, willing to make people uncomfortable, if this helps to achieve that.]

Recently, while laying in bed with my partner, I brought something up that I’ve never brought up with anyone else in my life. I explained to her the insecurities I’ve dealt with because of my own perceptions of my penis. The reason I felt I could do this is because she has been the only one who I’ve felt 100% comfortable being naked around. She makes it clear to me that she loves every inch of my body, which in turn makes me more accepting of it.

A few nights later we watched the documentary “My Penis and Everyone Else’s” by Lawrence Barraclough (at the bottom of this post). She’d seen it before but thought it was important for me to watch it. It was. We spend a lot of time and energy keeping parts of our bodies hidden from the public. You’ll see someone violently murdering or raping another person regularly on TV and in movies. You’ll rarely see a penis. What message does this send? Why are we made to feel ashamed of what is completely, 100%, natural? How much of a variety of penises and vaginas have you seen in your life?

I’m not convinced that women know how insecure it makes men when all we hear is “size matters.” What’s not taken into account, though, is how two people fit together. This blanket statement is generally perceived to mean “the bigger the better.”

So how is it that anyone can look at this industry to set the standard of what is beautiful? If you knew the true diversity of genitals out there, might you feel better about your own set, knowing that, as a human being, you’re just normal? That you’re unique, and this is the way it’s supposed to be?

The media (surprise, surprise) perpetuates this as well by choosing to show clips of female characters comparing their boyfriends’ genitals or ridiculing men who are less than well-endowed. The word is out there: Bigger is better. And it’s all men hear. All. The. Time. This is then hammered home within our social circles, because everyone else is informed by mass media as well. It’s a pretty vicious cycle.

I’ve lived with this insecurity my whole life, and I’m pretty fucking tired of it. On the one side, I’ve been insecure with women because I’ve been scared of what they would think when it came to business time. I’ve been insecure with men — showering at the gym, using a public urinal — because of the competitiveness factor. This insecurity is a hole that bores deep down into self-esteem, potentially affecting relationships and, in general, has been a barrier to loving myself for who and what I am.

I’ve never measured my penis. Truthfully, I’ve been too scared to do it. I’ve never wanted to know, scared to confirm that yes, indeed, I am short of average. I’ve come to partial peace with this due to the fact that, at 5’6”, I’m also under average height. It’s all relative, isn’t it? But that’s actually besides the point. It’s just a story I’ve told myself to feel better. In reality, it doesn’t even matter. We have what we are born with. Period.

This discussion needs to be had. As a culture we need to learn to celebrate what we’ve been given and not want anything else. Part of that is going to include changing what we see in the mainstream. Let’s see vaginas and penises on the television and in movies. And not just “perfect” ones. All sorts of different ones, because each one is unique and unlike any other, and all are beautiful. As a part of nature, how can they not be?

Let’s choose to feel better about our bodies. Let’s learn to accept them for what they are. The root of the issue is in the mind, not in the physical body. If you had a beater of a car that barely chugged along, would you get a paint job to feel better about it? Or would you rather fix what’s under the hood so that it ran reliably?

Would love to hear your thoughts on this.

Thank you and if you know someone who would be interested in this topic, thanks for passing it along.